I just returned from a very random trip to California. I had planned to return at the beginning of the month so I could see how beautiful San Francisco supposedly is in the winter months, but I was having my family emergency (mentioned previously) -- and it was actually quite beautiful this time, no fog! But either way, due to a couple recent experiences I've had, the time is finally ripe to discuss my gender identity and how it affects my modeling.

I've always been open that I'm gender queer - an androgyne, or genderful, or gender-neutral, what have you -- and it's gone without much negative response. This is probably due to my gender presentation in modeling being primarily cisgender. I look like (most) everyone's conception of a woman, so people typically aren't bothered by it. It has only been on one occasion that someone contacted me offering to shoot portraits, and I explained my desire to express my gender identity in an honest portrait -- they lost interest, became very rude, said they were only interested in shooting me in a way in which I had a feminine presentation (which I wasn't against doing for a trade shoot), and God. They just flat-out refused to shoot with me after that, in any way.

While I was in San Francisco, walking down Mission Street, some man yelled: "You're beautiful, baby! ...even though you look like a man." I know damn well what I look like, and when such comments are aimed at maiming. I promptly flicked him off without much investment. About ten minutes later, someone called me "sir," which is actually my preferred form of address, however... I'm so used to compensating, in a sense, for people's embarrassment and mistakes that I too become embarrassed. He didn't show any embarrassment, so I just walked away feeling unsettled by the experience that my gender expression was being taken into account, for once, only for it to be completely incorrect (my outfit was a mixture, but certainly not masculine).

Ever since I started cutting my hair, "Is that a girl or a boy?" has become a constant. I've come to understand that in most instances involving adults, it's used as a method of voicing one's disapproval of my appearance ("He, she, whatever it is," "...that little boy") rather than actual confusion. They do it out of disrespect, or an attempt to offend me by calling me the opposite of what they think I am.* Children are just learning gender, unfortunately, so I don't put much weight into their words... but I do put a lot of weight into their parents' lack of action. I have never heard a parent with their child say "Don't say that, that's rude!" Never. When one can't be identified, according to the binary, I somehow always manage to lose my personhood. I'm not worth sticking up for, because I don't have a gender. I'm doing something wrong. I don't deserve to be treated with any amount of dignity. What is up with that?

Why do people need to know what's in my pants in order to feel at ease with themselves? Why must I be uncomfortable as a result of this? It would be so much easier to just snap at them, "I'M A GIRL/WOMAN." But what is it that they actually want to know? To tell them I'm a female, which I am, is to give them an incorrect idea of who I am according to their discourse. It's all fucked up.

Sexism and transphobia are far more ingrained in our culture than even racism, because the sexes and genders are undeniably, physiologically different in both form and function. (Though if you have a penis, why don't you ask yourself why you have nipples -- then you can recognize our actual sameness, and hopefully how "nature vs. nurture" is completely cyclical and self-feeding.) When it comes to modeling, especially fashion, there seems to be a greater appreciation of varying degrees of attractiveness and beauty. People are constantly lambasting fashion's standards (to ironically opt for a more male-oriented, fertile image of feminine beauty) yet they don't realize that it's giving a place to alternative forms of beauty that would most often go unappreciated in any other era. Excuse any insensitivity I express when I say this, born with the body I was: If you're going to let a magazine, or even a man, decide your beauty... You need to re-evaluate yourself and get over the scapegoating. If you have a problem with how I look, don't scapegoat me. Attack the system that glorifies my body, as I do. I'm taking responsibility for the power I've been given, and I appreciate beauty from every walk of life. Practically, and even reproductively, why would anyone want to be built like a fashion model? Get asked if they're anorexic all the time. Told to eat a burger.

Finally... I want to embrace my androgyny more in my modeling. I've only really done so twice prior to this, and here's one of my favorite examples (by Perry Manuk): 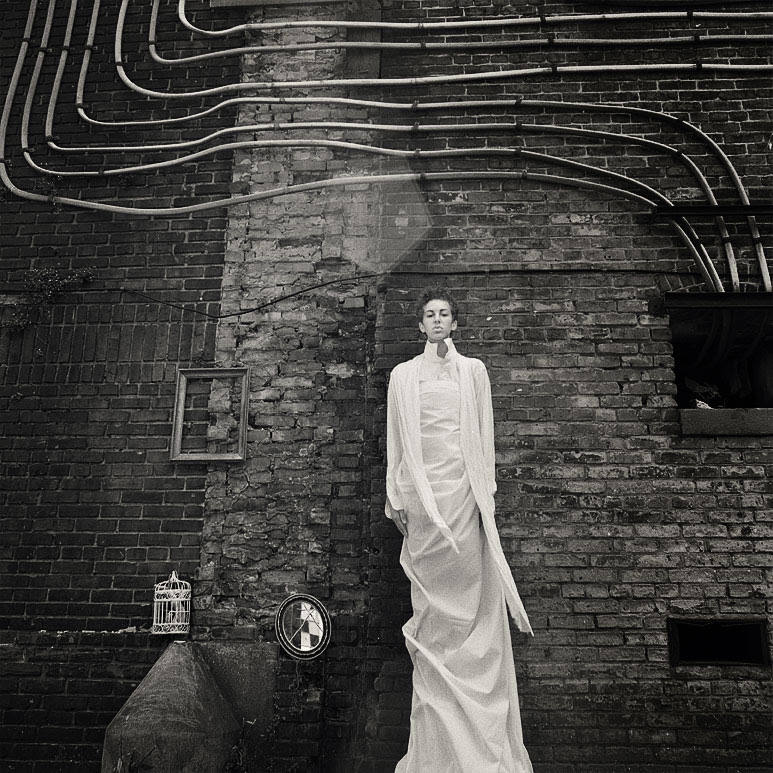 * - In China, many people just flat-out asked me (which is also rude), and I had one woman that made a sincere mistake when I walked into the women's bathroom at the airport, so I wasn't mad, just frustrated at Chinese people and gender.
Posted by Gabe at 11:40 AM 1 comment:

Tense shoot simply due to how public the location was -- but he is always very kind, and somewhat challenging. We got some excellent results this round. :) 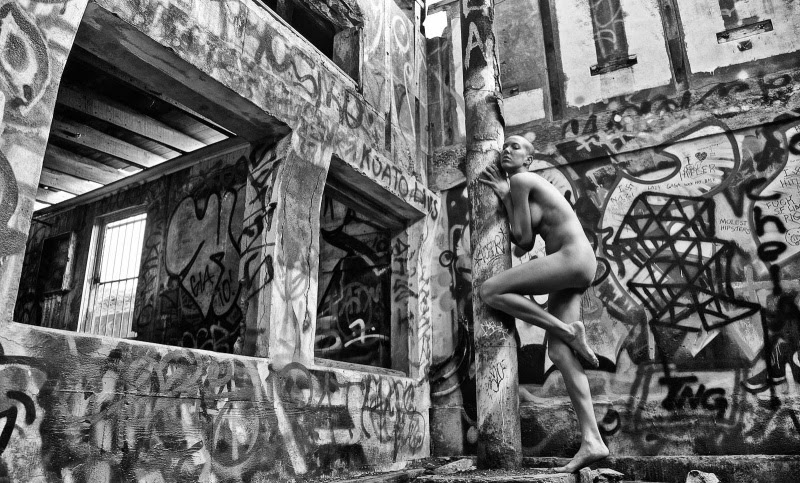 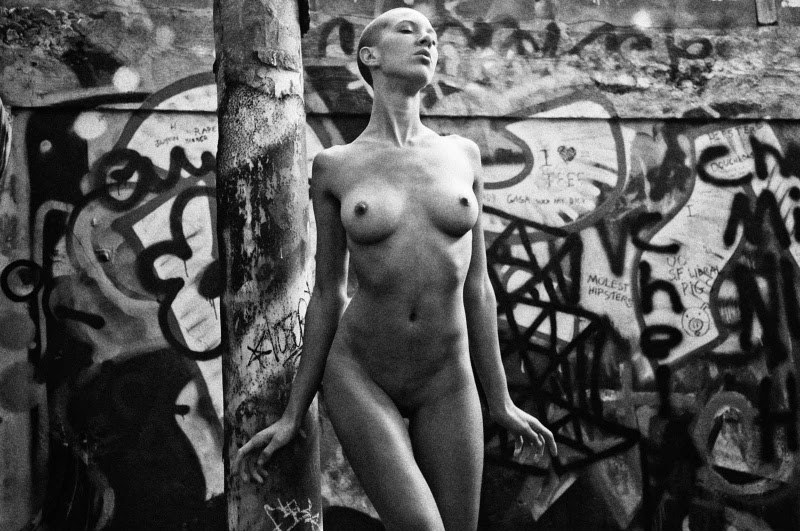 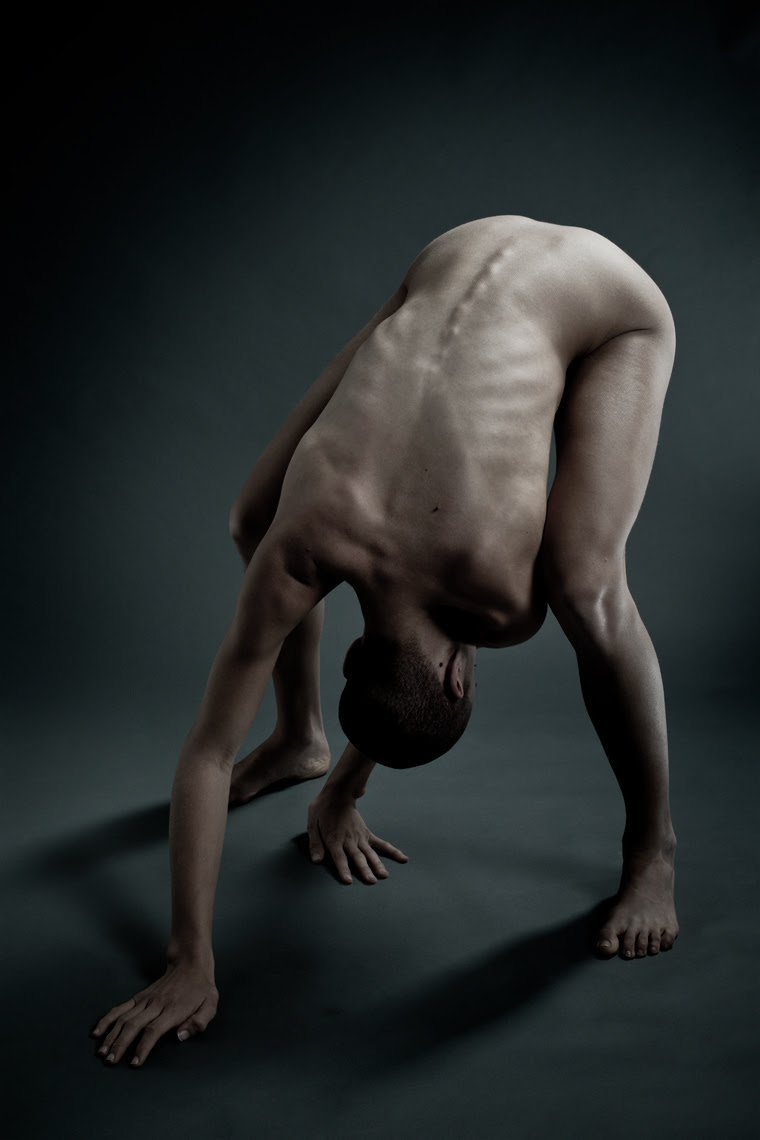 He thinks a lot about his work, and makes so many interesting images. In working with him, I got to explore a different style of posing I'm not usually able to experiment with (though I want to, since my grand realization). Here's one of them.
Posted by Gabe at 10:58 AM No comments:

Old people can very well be sexy. Yet it is often found tasteless and unappealing when they do so in a way that beckons to a youth that doesn't belong to them -- when they dress or pose in a way younger than their age. But, how else are they supposed to be actively sexy? I'd really like to explore that.
Posted by Gabe at 10:53 AM No comments: